Back in 1944 our engagement and relationships with social, economic and environmental boundaries were very different to what they are today. The world was, metaphorically speaking, smaller; less connected, less populated, and less governed by the ebbs and flows of business and finance. The laws of Nature were still largely unknown, even after the advent of Darwin, Humboldt, Thoreau and others in the preceding decades and centuries. Sir David Attenborough was 18 years old. The nuclear bomb didn’t exist. The world’s population was a quarter of what it is now.  The world was at war. Put simply, everything was different.

Fast forward through that year and the call to arms for a new finance system – Bretton Woods; the widespread adoption of Gross Domestic Product (GDP); the neoliberal essay of Friedman in the 1970s; and decades of huge growth in the finance system – the world is in a very different place. So, why is Bretton Woods still spoken about now and what is its significance to the challenges we face?

In early July 1944, 730 delegates from 44 Allied Nations met at the Mount Washington Hotel in Bretton Woods, USA to discuss how to rebuild a finance system. It was clear that a new finance system would need to help Europe, and the world, recover after the war and prevent a repeat of the economic collapse that happened in Germany after World War I. There was a focus on the future post war world. This included how finance could be mobilised equally to ensure fair and equitable access across Europe. New institutions were agreed at the conference; these financial institutions would provide the infrastructure and the framework to enable much of this distribution. The International Monetary Fund and the International Bank for Reconstruction and Development (IBRD) – now part of the World Bank Group – were born, alongside measures to ensure exchange rates were not punitive, enabling cross border trade and increasing the possibility of frictionless trade. The advent of the IBRD has subsequently given birth to a network of Multilateral Development Banks (MDB) around the world, including the Inter-American Development Bank, European Bank for Reconstruction and Development, African Development Bank, Asian Development Bank, and others. They were all tasked with the similar role of building infrastructure and ensuring equitable growth in low- and middle-income countries. Their shareholders are governments, including the G7.

Bretton Woods has become synonymous with crisis and resilience financing; a totem for what’s possible when the world comes together to agree what a new finance system needs to look like. In the face of our growing climate, nature and inequality crises, some have turned back the clocks to Bretton Woods to inspire a reimagination of what finance now needs to become. Whilst it’s imperative for us to reimagine our finance system to drive much of the changes that are required – do we need new institutions or are the ones we have able to do more?

As the Covid pandemic continues into its third year, failings of the MDBs in safeguarding people have emerged 1 , alongside a call for their reform. But, if the MBDs are failing in their remits is that a failure of policy and ownership structures, rather than the finance? Reimaging MDBs as agents of real-world outcomes, long term sustainable change and value creation is within investors’ grasp if private and public finance with clear policy and investment remits are collaboratively considered. One of the challenges is the inability to take on risk due to the need to safeguard their AAA risk ratings 2 . In order to ensure funding at favourable rates, that can be passed through without punitive inflation, MDBs in the current system need to maintain an almost clean rap sheet where risk is concerned. The big question is how can MDBs be freed up to take on more risk to enable greater support and transition to occur? Do their ultimate stakeholders and the finance industry need to rewrite the binding contracts?

MDBs are the institutions through which adaption, transition, resilience and recovery efforts need to channel; they are a significant conduit through which we can fast track the delivery of the UN Sustainable Development Goals and the United Nations Framework Convention on Climate Change Conference of the Parties Agreements 3 . In 2021, MDBs provided $51 billion of finance to low- and middle-income countries for climate finance alone 4 . This sounds like a lot and makes MDBs a major contributing group to the international climate finance commitment 5 as laid out in the Paris Climate Agreement. But, in reality, the UN estimate we need at least $100 billion a year 6 . MDBs also provided $4.6 billion in financing for fossil fuel projects in 2021 7 , a $666 million increase on 2020 levels according to Oil Change International.

Increasingly, stakeholders are calling for a reform of the MDBs to enable them to play a greater role in the delivery of a clean and equitable energy transition. Mia Mottley, the Prime Minister of Barbados is particularly vocal on this. Her proposed Bridgetown Agenda 8 ahead of COP27 called for more international funding, specifically for the climate crisis to be made available to the Global South through debt relief. Other G20 nations have also signalled their desire for reform of the MDB sector 9 .

There are growing opportunities for private investors to invest in MDBs in liquid markets, through bond issuances. The largest MDBs have been able to  leverage more than 30 times their paid-in capital since their creation 10 . They’re powerful magnets for finance. It makes sense that private investors should now be thinking about the role of their wealth in partnering for change with what is fundamentally public finance. Whilst a nascent field historically, more opportunities are entering the markets for the investor keen to play a role in reconstruction and development, alongside MDBs. The World Bank Wildlife Conservation Bond (the Rhino Bond) 11 is one such example. Fund managers are beginning to lean into the MDB sector, after more concerted efforts by MDBs to court private sector finance. At Tribe, we’ve witnessed this growing trend and have participated in it. We recognise the opportunities to support the sector and carry the load in delivering the infrastructure needed in low-and middle-income countries.

MDBs are imperfect beasts. They’ve been subject to the, often, unhealthy influences of GDP, the advent of the Friedman Doctrine, the ignition of neoliberalism, globalisation, and populism. But their potential is profound. If Bretton Woods teaches us one thing, intentions are beautiful, but action drives results. If the actions don’t mirror the intent, then the impact once sought can get derailed. To release the collective power of MDBs, it’s important to revisit those intentions and ask if the actions witnessed are in pursuit of those original intentions. If they aren’t, then MDB stakeholders need to drive that change. As previously mentioned, initiatives like the Bridgetown Agenda, are beginning to drive results in this regard. But in order to prevent one stakeholder having too much political sway in any one MDB, ‘ownership’ must also be considered. In a world that requires radical collaboration to create the change required, MDBs form part of the critical infrastructure needed to transition. 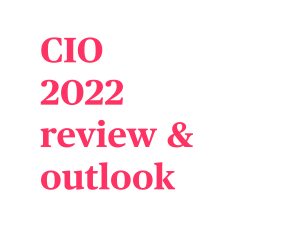